Several rounds of gunfire rang interrupting a string of quiet hours where police had surrounded a home on Michigan Avenue in Latonia.

Moments later, scanner traffic indicated that a suspect was in custody and that the house was on fire.

After more than twenty hours, a volatile and dangerous situation had reached an end.

Suspect Michael Vaughan, a decorated military veteran who had spent those twenty hours intermittently firing upon officers with a rifle and detailing the events live on Facebook, was shot in the shoulder and taken to University Hospital. He will likely face at least one charge of attempted murder of a police officer with other charges possible.

Covington Police were tipped to a possible emotional crisis at the Michigan Avenue home at around 11 a.m. Saturday, according to Chief Spike Jones. By 5 p.m., after noting several Facebook posts by Vaughan that alluded to possible harm to himself, more force showed up. When Vaughan noticed officers outside his home, he opened fire on them.

"I immediately got my rifle and shot over their heads," Vaughan posted to his Facebook page which was taken down overnight. "Heard one of the jackasses yell out "shots fired". Guess what NO ONE will ever point a fucking weapon at my house with my kids in it and not get shot at."

Vaughan's posts, after being reported by local media, caught the attention of a line of military-related blogs and social media outlets, accumulating tens of thousands of readers searching for up-to-the-minute updates. The story was also picked up by national news outlets.

The posts included references to a possible falling out with a girlfriend.

More pressing for the police, however, was the presence of Vaughan's three children inside the home. Vaughan, 43, made references on Facebook to the children being asleep during the situation. The kids remained inside until early Sunday morning when a deal reached with police prompted their release.

"He kept his promise to us, we kept our promise to him," Jones said of the negotiation for the children's release. Kenton County Commonwealth's Attorney Rob Sanders called it "one of the most intense transactions I have ever seen".

After Vaughan was wounded and the situation ended, Jones was asked to elaborate on that promise. He said Vaughan requested to speak to "an individual" on the phone. That request was granted, though Jones would not identify the recipient of the phone call.

Vaughan lived up to his end of the bargain and allowed the children to be removed by officers. "They followed our directions. It was very tense," Jones said. "It went very smoothly." 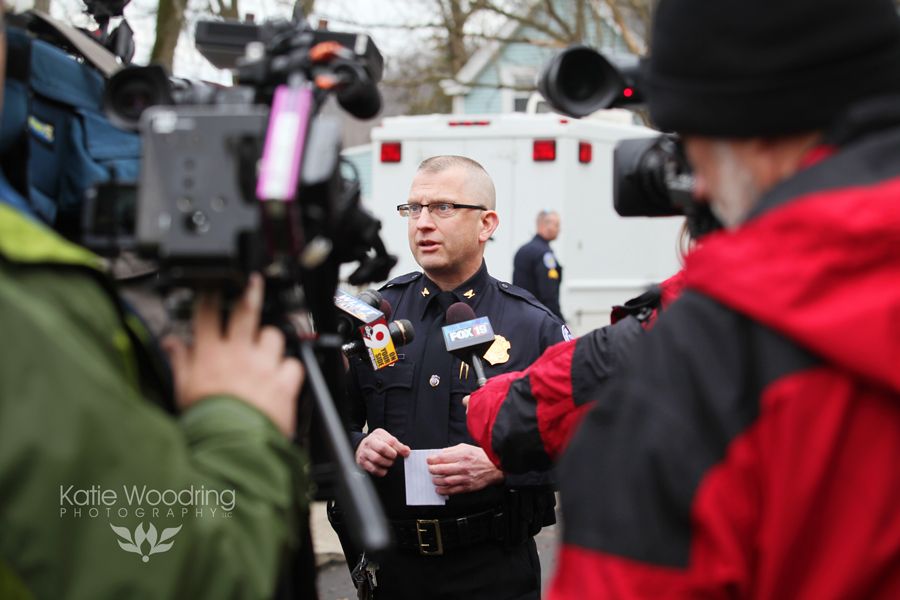 The kids, ages 15, 11, and 5, were taken to nearby Latonia Elementary where the police had moved its command center. (The night before, the command center was at Rosedale Manor, closer to the home.)

The children were examined and determined to be in good condition. They are with relatives, Jones said.

The standoff with Vaughan, however, went on for another six hours. When police subdued him with a gunshot wound, the former National Guardsman set the house on fire. Those flames were quickly extinguished and Vaughan was taken to University of Cincinnati Medical Center.

Vaughan's military service was referenced many times by police, by supporters online, throughout the media, and by Vaughan himself on Facebook where he bragged about his knowledge of urban combat and that he watched CIA officers interrogate suspects in Afghanistan.

Vaughan's military record, however, is not without blemish. In 2009, he was investigated for sexually harassing a female to whom he had sent threatening e-mails and with whom he had a sexual relationship while still married, according to court records. In 2010, Vaughan's security clearance was revoked and his federal recognition was withdrawn. A federal court upheld that decision in January 2013 when it dismissed Vaughan's lawsuit against the Kentucky National Guard.

Vaughan is also at least somewhat familiar to police. His recent arrests in Kenton County include two violations of Kentucky emergency protection orders and domestic violence orders, once in January and another time in May, according to jail records.

Vaughan is a Covington native who graduated from Holmes High School in 1989. He is expected to be taken to the Kenton County Detention Center after he is treated for the gunshot wound.

Photos by Katie Woodring (where noted)

Bellevue at 150: Bill Donnermeyer's Life in Service to the City