Sun, 01/05/2014 - 08:12 RCN Newsdesk
Increase Text Size
Brunch will not be served at Chez Nora on Sunday.
Or ever again.
At least not under the ownership of Jim & Patricia Gilliece who operated the Mainstrasse Village landmark for the past twenty years.
Instead of opening the front door this morning, the couple will place a sign upon it: Chez Nora Has Closed.
They will also display a framed quotation attributed to President Theodore Roosevelt: "Far better it is to dare mighty things, to win glorious triumphs, even though checked by failure, than to take rank with those poor spirits who neither enjoy much nor suffer much, because they live in the gray twilight that knows neither victory nor defeat."
The quote was a favorite of former Kenton County Circuit Judge James Gilliece, Jim's father. Jim said he's had those words memorized for forty years.
On Sunday morning he may feel them more than ever before as the Gillieces walk away from the place that has been their second home since 1994.
"We were culinarily tardy," Jim said. "We were late in responding to the challenges presented to us in our neighborhood by three excellent new restaurants."
Mainstrasse has seen its fine dining menu grow to include Bouquet, Otto's, and Main Bite, and will soon add Commonwealth Bistro. The fresher, and perhaps more exciting atmospheres, at these new popular upstarts outshined its older neighbor.
The economic collapse of five years ago didn't help and neither did the loss of longtime regulars, some to job losses and retirement, some to relocations, and some, Gilliece said, to death.
Though Covington is seemingly at the very early, fragile stages of a possible renaissance, the economic outlook for the restaurant was too much to overcome and the Gillieces saw the writing on the wall.
Were it May 1, Jim said, Chez Nora would possibly be in a position to tough it out. But it's January and the Gillieces did not think they could make it even another two months.
"I'm excited to have a new chapter, but I'm scared to death," Pati Gilliece said.
Most of the restaurant's employees, who will receive a final paycheck and be eligible for unemployment, the Gillieces said, will find out about the closure on Sunday while many of Chez Nora's fans will learn of it through this article.
"I feel awful," Pati said, "because we've been lying to everybody for the past three weeks and I'm not good at that."
Jim said it's a common practice in the restaurant business to notify employees at the ending stages of a closure.
In a tight-knit neighborhood like Mainstrasse, its a challenge to keep anything secret.
"It's kind of a race," Jim said. "Can we get to closing before anybody finds out?"
The Gillieces' next race is out of town. They plan to spend some time together away to decompress following the closure of Chez Nora. It will be the first vacation for the pair in two decades in which they didn't have to worry about what was going on at the restaurant back home.
There will be no going away party. Pati said that's why she worked so hard to encourage as many people as possible to attend the annual Christmas party. That was their last hurrah.
When they purchased Chez Nora in 1994 from founder Nora Dempsey, Jim was a stand-up comedian and Pati was a waitress at Barleycorn's, not exactly the resumes expected of successful restaurateurs.
But the Gillieces found their spot and thrived for many years. When they eventually bought the building their success forced them to expand.
In the late nineties Jim conducted what he called a marketing study by standing at the front door. That's where he was frequently asked by patrons if they could sit in the non-smoking section. Jim would tell them, no, because there was no non-smoking section. He would also be asked about wedding rehearsal dinners, to which he would also respond in the negative: there was no private room.
The kitchen was only fifty square feet and the dining area was dominated by its bar.
"I thought, hell, if everyone wants to buy these two things, let's go get those two things," Jim said.
In 2001, Chez Nora constructed a new building next to the original one that featured a non-smoking dining room, a jazz club upstairs, a rooftop terrace with a view of the Covington and Cincinnati skylines, and a private reception room called "The Judge's Chamber" in honor of Jim's dad. 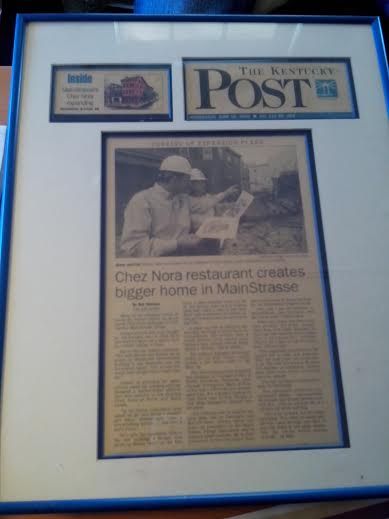 The corner of Sixth & Main Streets became a primary destination for Covington's movers and shakers.
Pati ran the kitchen and Jim ran the front of house. Popular crab cakes and cheesecakes in addition to the well-known and familiar staff helped people feel at home. Some regulars would eat at Chez Nora more than three times a week.
But those die-hard regulars were not enough to sustain a business that had become a signature location in Mainstrasse Village, one that fittingly grew from a fortuitous encounter at Maifest in 1993 when the Gillieces first caught wind that Dempsey wanted to sell her namesake enterprise.
The couple put the building and the business up for sale last year. With no takers, they recently reduced the price by half a million dollars.
It is now listed at $1.2 million.
In addition to the Chez Nora Has Closed message and the Teddy Roosevelt quote, another sign will go up on the building: Available.
The doors will be locked on this Covington staple, a pioneer in the idea of outdoor dining in Covington (they were the first to offer the now common option of eating on the sidewalks of Mainstrasse).
"It's going to be very disappointing," Jim said, "but I believe that (Teddy Roosevelt) quote. The word disappointment isn't in there."
"It's going to be sad," Jim continued. "I have a lot of customers of mine that have become great friends."
"It's going to be odd," Pati said, tearing up.
"I'm going to miss those people a lot on a personal level," Jim said.
And Covington will miss a longtime business at one of its most prominent intersections.
Written by Michael Monks, editor & publisher of The River City News
Photos by RCN