Plans Emerge for $2.5 Million Expansion of Arts Campus in Covington

"We are coming up on our 100th year and it is really significant for us."

Ray Kingsbury, executive director of the Baker Hunt Art & Cultural Center in Covington, joined members of his board and an architecture firm in showing off the center's ambitious plans for an expanded and renovated campus. "To quote (COV200 co-chairman) Norm Desmarias, he said he wants Covington to be a significant destination. I think that's what we're trying to do," Kingsbury said.

The historic mansion on the 600 block of Greenup Street that was once home to the widow Margaretta Baker Hunt, a Covington arts, education, and religion-oriented activist, as well as the adjacent Scutter mansion that belonged to her niece, will be the targets of interior renovations. Baker Hunt offers classes in the arts and culture throughout the year for children and adults. "We are combining some classroom space, making the space more functional, adding much needed administration spaces to make the campus more functional, and we're making buildings safer, looking at fire escapes and adding much-needed signage," said architect Chad Burke of Cincinnati-based firm GBBN. "The entire campus will be more accessible." That will include the addition of ramps and an elevator.

All four existing buildings will be renovated and there will be some new construction, too. The plans were unveiled Monday afternoon at the City of Covington's urban design review board meeting. The plans were not up for consideration by the board, yet. The presentation was preliminary. 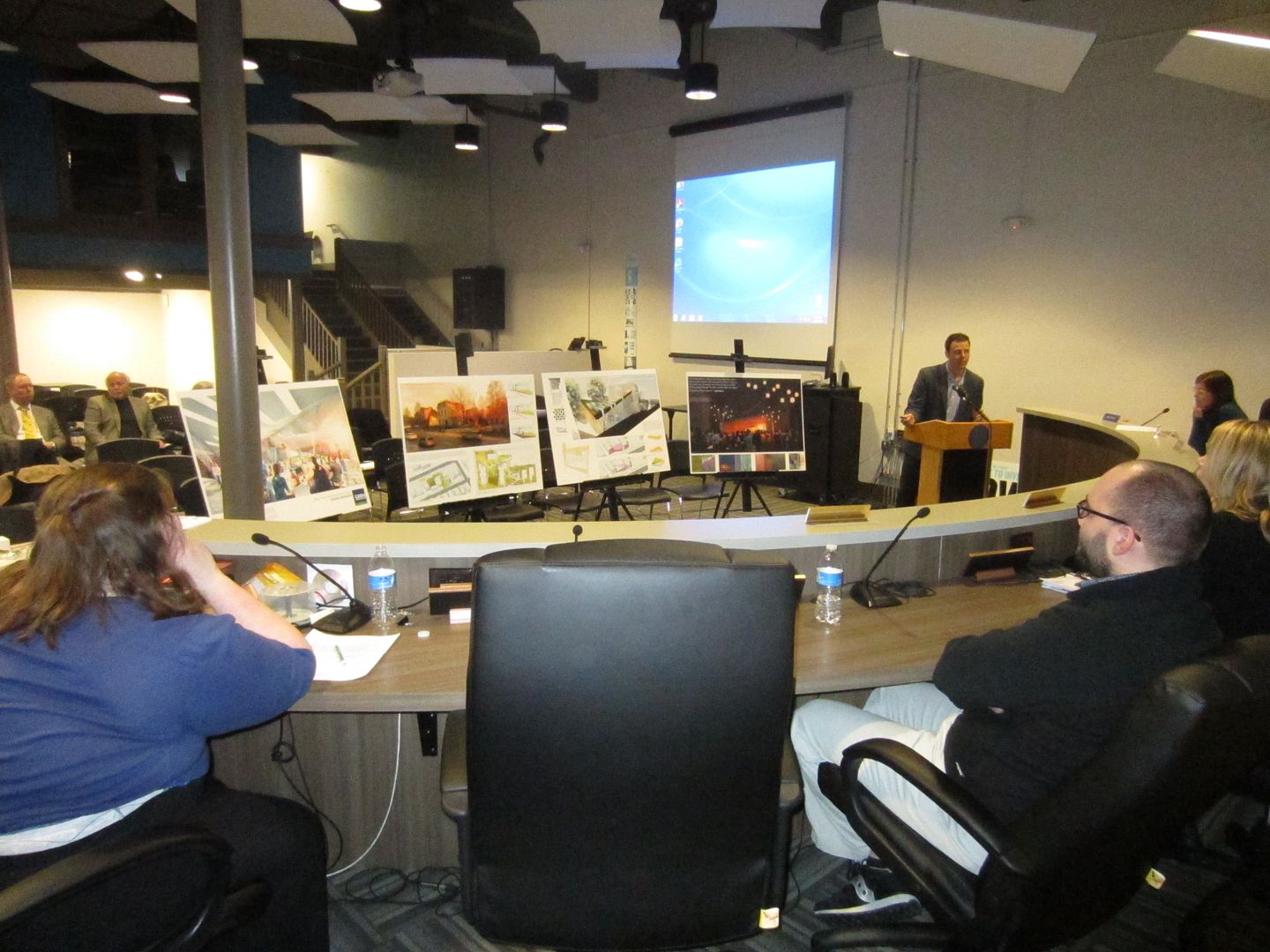 "One of the main objectives of the master plan is to give this campus some more visibility," Burke said. "We have proposed a new front entrance that is accesible off Greenup where the existing wall folds back against the landscape."

New sculptures would be added to the campus along with a new, modern glass-walled structure for activities. The design is different than most of the surrounding historic buildings in the neighborhood and was met with some initial concern from the board. "This is a campus and not an individual property for the purposes of infill," Greg Otis, owner's rep for Baker Hunt, told the board. "You are relieved of the guidelines relative to the cadence of the street. Think of this more as an institutional campus as the way to interpret the architecture." He said the campus would not operate any differently than it does now.

Kingsbury said that the proposed pavilion building should be viewed as a "functional sculpture". "It will be our sentinel moment for this 100-year anniversary," he said. Baker Hunt was founded by its namesake in 1922. Kingsbury said that the ideal circumstances would allow for the re-envisioned $2.5 million campus project to be completed by next year's Twilight in the Gardens, the annual celebration of music and food that is the organization's main event.

"Over the last four years, our visibility is way up and people are finding us," Kingsbury said. "It's also perfect timing when schools are moving away from the arts. We're trying to move it back towards the arts and we think that is quite significant."

The campus is also improving its curriculum, is adding new teachers, and now seeks to improve the facilities, Kingsbury said. "Look across the river and there are lots of places springing up in competition with another: Mariemont, Blue Ash, Sharonville. Luckily, that hasn't happened over here on this side but we need to improve to attract those folks," Kingsbury said. "We have 1,000 students this session and we need to make sure they have an exceptional experience at our place."

Some of the necessary funding is already in the bank and Baker Hunt will embark on a fundraising campaign for the remainder.
"I would hope that you consider all this in context," Kingsbury said to the board. "It is extremely important that we maintain our assets and we strengthen our assets, and I hope you think that Baker Hunt is one of those."
Correction: A previous version of this story identified Greg Otis as being with GBBN. He is not.
Story & photos by Michael Monks, editor & publisher of The River City News
Slideshow Images & Captions:

Bellevue at 150: On Down the Line: the City and the Railroad