It was a thrilling Friday night in Northern Kentucky with the third round of the high school football playoffs.

Undefeated Simon Kenton was held to its lowest points total of the year but was able to sneak out of Cooper with a win. Scott's record-breaking season came to an end in the final seconds. Highlands denied Covington Catholic again. Beechwood went to Louisville and came back with a win. Newport Central Catholic made a big statement in walloping Lloyd.

What a night! Here's what happened:

Johnson Central took its first lead of the game Friday night vs. Scott when it mattered most, winning on a touchdown pass with seven seconds left to clinch a trip to the state-semifinals for the Golden Eagles, 27-26. On third-and-10 from the Scott 30, senior quarterback Bryce Workman scrambled to his right and found junior Geordan Blanton in the right corner of the end zone as time expired to clench victory from the jaws of defeat for Johnson Central.

Scott made it 7-0 early on, capitalizing on a Johnson Central fumble on the second play of its opening drive, courtesy of a 30-yard catch-and-run by senior Roberto London. But, the Golden Eagles’ countered with a sustaining drive of its own, capped off by sophomore Tyrese Allen plunging into the end zone from a few yards out to knot the score at 7.

A roughing the punter penalty called against Johnson Central on Scott’s ensuing drive enabled the Eagles to retain possession and cash in. Following a 45-yard run by sophomore Nelson Perrin down to the Golden Eagles’ 15, senior quarterback Danny Fitzgerald rolled left to find sophomore Ryan Muck in the end zone for a 14-7 lead near the end of the opening quarter.

Each team traded punts until Scott senior linebacker Trey Hicks intercepted Workman’s pass that bounced off the shoulder pads of Blanton and gave the Eagles good field position for their final drive before halftime. With 21 seconds remaining in the half, London took a handoff one yard up the middle for a 20-7 lead at the break.

The third featured each team once again trading punts until the Golden Eagles’ possession featuring long runs by Allen and senior Conner Ratliff, who took a pitch from Workman 50 yards, down to the Scott three. On the ensuing play, Blanton took it in up the middle to close the deficit, 20-14. But on its opening possession of the final quarter, Scott’s London broke loose down the right side, 78 yards for a touchdown to stretch the Eagles’ lead back to 26-14.

Like it had done its previous drive, Johnson Central matched Scott’s score with one of its own. With good field position near midfield, the Golden Eagles were able to move the ball well against the Scott defense and inch closer once again, this time courtesy of a one yard run by junior fullback Gunner Slone, to make 26-21.

Senior Jordan Velasquez intercepted a fourth down pass by Workman with under three minutes remaining inside his own 10, appearing to nearly seal the game for Scott. But as it turned out, the game was far from over. Putting the team on his back for what was the game-winning drive, Blanton kept his teams’ season alive with a fourth-down-and-14 catch and conversion with under 1:30 left to play. The next several plays went to Blanton, including the game-winning end zone grab, just over the hands of the Eagles’ defender, extending their season by a matter of inches, abruptly ending the best season in Scott history, 27-26, captured by many Eagles’ players lying face down on the turf in disbelief opposite the sudden jubilee of the Golden Eagles’ players and fans.

Johnson Central (11-1) moves on to face Wayne County in the Class 4A semifinals next Friday at 7:30, while Scott completes their record-breaking season at 10-3.

MORE SCORES & STORIES ON THE NEXT PAGE:

In the ancient myth of Sisyphus, the Greek gods condemn him to ceaselessly roll a rock up a mountain, only to have the boulder inevitably roll back to the bottom where he must start again. So it has been for Covington Catholic football when facing their arch rival Highlands. The Colonels had lost to the Bluebirds 14 times in a row, but they faced that mountain once more on Friday night, this time in the regional semifinal round of the Class 5A playoffs in Fort Thomas. The outcome was the same, as the proverbial rock once more rolled away from Cov Cath, and Highlands advanced in a 44-22 win.

“Each game is new. Every game in the past means absolutely nothing, every game is a new game with those guys. I feel very fortunate to get out of here with this one,” said Highlands head coach Brian Weinrich.

The quick answer to the Bluebirds victory that knocked the Colonels from the postseason for the sixth year in a row was running back Nick Kendell finding gaping lanes to run through during key situations on his way to 225 yards on 22 carries and three touchdowns.

“We knew coming in that we needed to get him the ball. He’s making plays each week, game in and game out, and you got to go with your guy,” said Weinrich.

The game started out slowly, with the Colonels defense doing just enough to keep the score manageable at 13-0.  Highlands kicker Jared Dougherty, who showed tremendous power in his leg, chipped in a 38 and 27-yard field goal in that stretch, and quarterback Eric Hergot found Austin Miller for a 15-yard strike for the game’s first touchdown.

The pressure was put on Cov Cath at that point who needed any kind of score to hang in there, despite it still only being the first half.  The Colonels responded nicely, converting on two fourth downs, one inside the red zone and then scoring with sophomore A.J. Mayer passing to Cameron Pitzer on a lofty fade route in the corner. That made it 13-7 and became something for the Colonels to build on heading into the second half.

If Cov Cath had played a cleaner game in the second half, they would have demonstrated that they really aren’t that far behind the Bluebirds in terms of fielding a successful program. The self-imposed mistakes killed the Colonels down the stretch, though, wiping out big runs on penalties and fumbling the ball. On their first possession of the second half, the offense coughed up the ball, giving it to Highlands in Cov Cath territory.

Like good teams do, Highlands made them pay for their mistake with a beautiful 26-yard floater from Hergot to Miller who had beaten his man across the middle of the field in single coverage and caught the pass in stride for a touchdown. With that score and another field goal by Dougherty on consecutive possessions had the Bluebirds sitting pretty with a 23-7, third quarter lead.

If that wasn’t tough enough on the Colonels, Kendall decided to come fully alive in the fourth quarter and go for explosive plays on a regular basis. He busted out for a 44-yard touchdown run down the sideline, but that play was called back on a penalty. He followed it up with a 33-yard run up the gut for a score on 4th-and-1 that did count and put the Bluebirds up, 30-7. The interior of the Highlands offensive line did a great job moving their men to the right which allowed for a quick cutback left from Kendall and paved the way for the long run.

With Cov Cath looking dead in the water, they mustered their energy for one last great surge to prevent their season from ending. It began with Anthony Best getting into the end zone from six yards out. With the two-point conversion, the Colonels somehow found themselves in a two-possession game.

It became even more interesting with under five minutes left when Ian Summe caught a quick pass on a comeback route, twisted to his right quickly preventing the defender from getting much of a hand on him, and raced 63-yards down the sideline for an impressive score. Another positive two-point attempt and Cov Cath was only down a single score, 30-22 with 4:44 remaining in the game.

That’s really when Kendall decided enough was enough and dashed the Colonels hopes of advancing with two more touchdowns up the gut—one for 31 yards and the other for 20 yards.

“We wanted to put ourselves into position to be able to maximize each possession. They really control the ball and we knew that every time we got it, it was very precious and that we needed points every time we had the ball,” Weinrich.

Highlands improves to 8-5 on the season and have won seven games in a row. The Bluebirds will host Pulaski County (12-1) next Friday night in the Class 5A semifinals. Cov Cath ends their year at 5-8.

MORE SCORES & STORIES ON THE NEXT PAGE:

Newport Catholic is hot at the right time and put the smack-down on Lloyd early Friday night. The Thoroughbreds have won 7 of their last 8 heading into next week's Class 2A semifinals against Danville.

But Lloyd was hot, too, and the Juggernauts were winners of 5 of their previous 6 games when they visited Newport. But six turnovers, four of which resulted in defensive touchdowns, doomed Lloyd, which returned to Erlanger with a 9-4 record on the year.

But the Lloyd offense could not capitalize, driving deep into New Cath territory twice, only to lose possession. 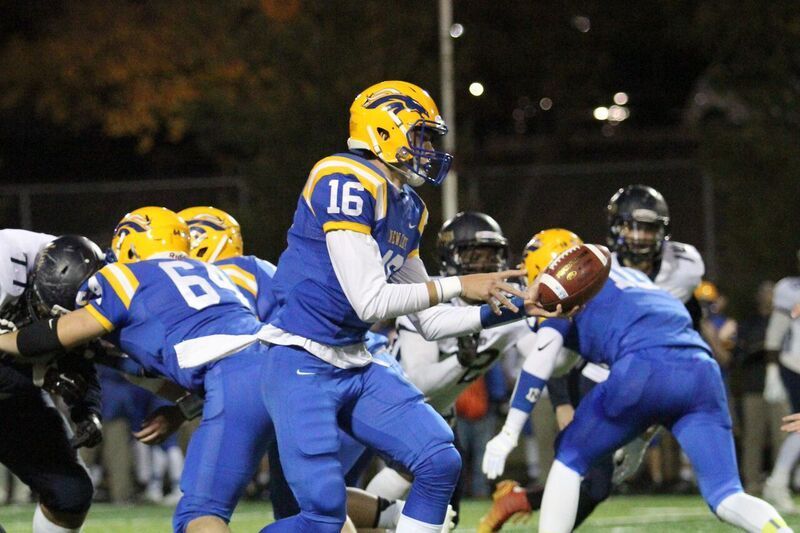 The Pioneers survived -- but barely. In this Class 6A clash, a rematch from September when Simon Kenton routed Cooper, 26-7, the Jaguars held the Pioneers to their lowest points total of the season.

Late in the game in Union, Cooper scored a touchdown and cut the lead to 13-12. In a bold move, the Jaguars went for a two-point conversion and the lead, but missed.

Though Cooper recovered an onside kick and had one last shot at it, Simon Kenton's defense held strong and secured the victory.

The Tigers went to Louisville and came back to Ft. Mitchell victorious.

Beechwood (21-1) will have another road trip next week when the Tigers travel to Russellville (11-2) in the Class 1A semifinals.