Recent gatherings of motorcyclists who may even be racing across the Taylor Southgate Bridge are starting to annoy guests at the Hampton Inn along Newport's riverfront.

Negative reviews are popping up on websites and causing hotel operators concern.

On Monday night, three staff members from the Hampton Inn, which sits directly to the west of the bridge and the new roundabout at its foot, spoke to the city commission about the issue.

"It's not only a quality of life issue. It's about the reputation. When you have North American Properties going to spend $100 million at Newport on the Levee, I don't think we want to have any outside visitor or tourist walking on Third Street from the Levee to be intimidated by race bikes," said hotel operator Shaun Pan, referencing the recent acquisition and redevelopment of Newport on the Levee. Pan's hospitality group is also set to construct its second hotel in Newport adjacent to the World Peace Bell.

He thanked the commission and the police department for their work to address the concerns already, which included placement of police vehicles near the roundabout to deter racers and loud bikes.

A perusal of online reviews related to motorcycle noise found compliments for the hotel overall, but, "The only things we didn’t like were the noise of loud motorcycles that seem to be common in the area...," read one review from July, and, "Personally I think it can be more popular if Hilton decides to have some sound-proofing shutters/devices installed for those large double windows that face the bridge ramp. The location is generally quiet even during the day, except some funny motorcycle/sports car noises at night probably because New Port levee (sic) has a few bars," read another from May.

"Be aware the hotel is located near a busy highway and bridge. The traffic noise is significant and could impact your sleep. On a sunny May weekend, motorcycles seemed to be circling from one bridge to the other while revving their engines," read another from May.

"Part of my job is to look at reviews on Google and TripAdvisor and with Hilton," said Hampton Inn vice president of operations Valerie Orr. "Noise complaints are beyond our control but we lost revenue from that if the guests ask for one."

Orr said the noise complaints from motorcycles go back three or four months. Most reviews of the hotel online are overwhelmingly positive. The Hampton was constructed on the site of the old Travelodge, whose reputation in the region was quite poor, and was known as a nuisance to police.

The Hampton Inn has given the site a new life, and tourists better accommodations, until the motorcycle noise started. 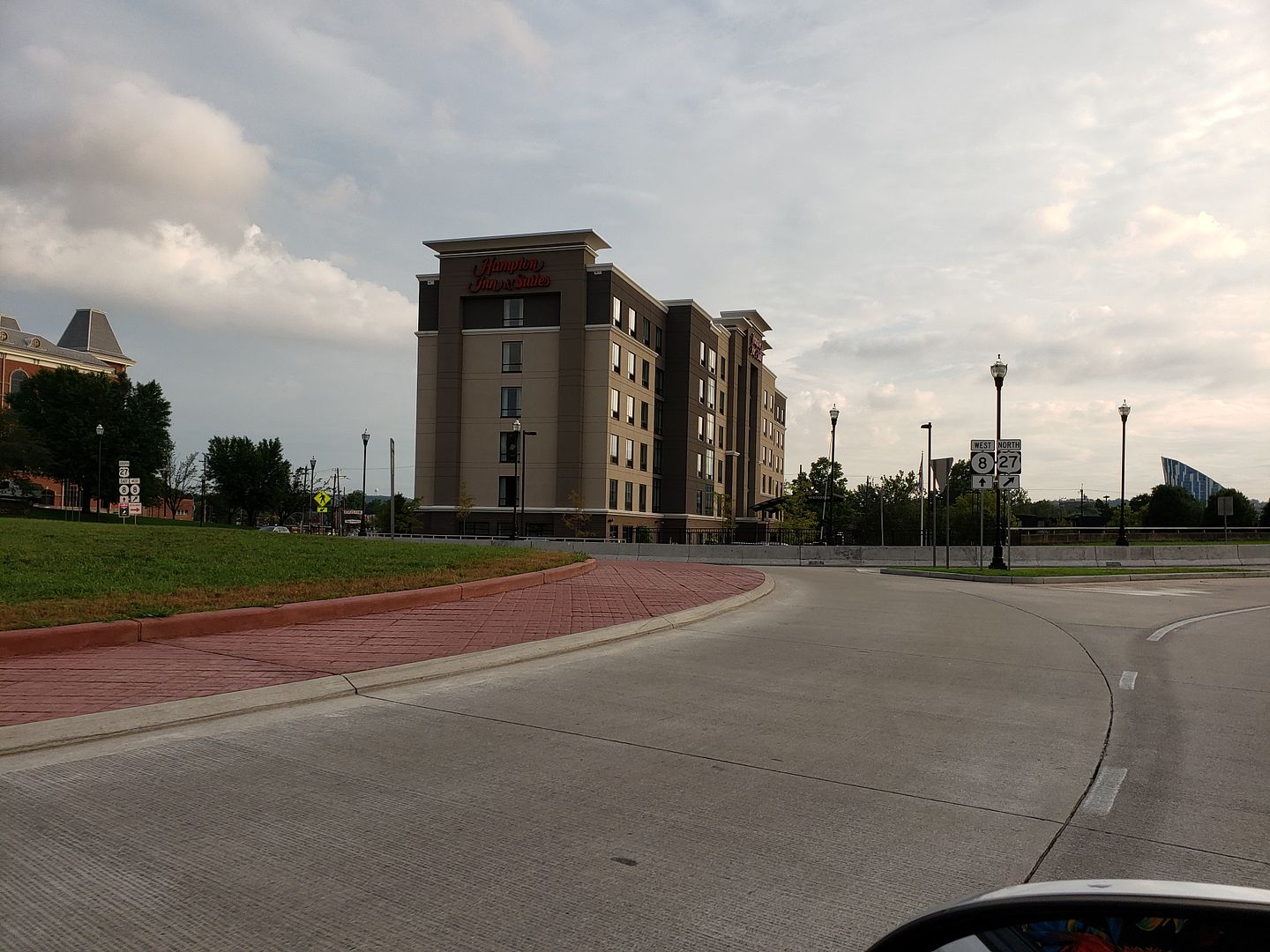 "These motorcycles are not standard motorcycles. They are modified or retrofit for the exhaust system to make them louder," Orr said.

Orr said that she has personally witnessed the bikes coming across the Taylor-Southgate Bridge, "doing a wheeling and cutting into the lane."

"They literally race at high speeds across the bridge and just around the area in general causing chaos," Orr said. "I understand the police department can't go around chasing everyone, but at the same time, bringing revenue into the city of Newport is one of our main priorities and I feel we do a great job doing that, along with other businesses in the area."

The Newport Police Department placed its SWAT team vehicle at one point near the bridge. "Since the SWAT vehicle was placed there, the noise complaints have dminished quite a bit," Orr said.

Police Chief Tom Collins said there isn't a whole lot that can be done outside of placing the vehicles there. "If you read KRS (state law) and ordinances, it's very hard to go into court and prove what's an inadequate silencer," Collins said. "A lot of effort goes into this for law enforcement. We tried to go about it in a different manner."

Collins said the department did more than just place unmanned vehicles there. Officers also patrolled in unmarked cars, "so we could initiate or block off so they wouldn't run from law enforcement."

The chief chose to use unmarked vehicles so as not to cause panic in the tourist-heavy area.

"We've got a plan that's going to heighten each week," Collins said. "This is the onset of this. This is going to continue until we get it stopped and we'll get it stopped."

"He's trying to stop it before it becomes an issue. I think that's the smartest way," said City Manager Tom Fromme.

The city manager asked the public works department to coordinate with the state about placing signs in the area warning about noise level violations, "so they realize it's an issue as well."

"I think it's picked up, the complaints," Fromme said. "It's become much worse."

"They're using the Taylor-Southgate Bridge and the roundabout as their personal race track," Pan said.

"We think it's something we can have a positive impact on," Fromme said. "They know, though, that we are limited because we can't sit up on that bridge and run radar, because that's a public safety hazard. We're going to lose that every time."

City commissioner Frank Peluso told hotel staff to call police immediately when complaints are heard. "We need to know what's going on as soon as possible," he said.

Wood Carvings Display & Demonstrations Up Next at Bishop Brossart Gallery

Beshear Appoints Three from NKY to State Boards and Commissions

Two Lanes on I-275 Eastbound Near Mineola Pike Closed Monday