5-year old Keegan Smith has never known life without tubes on his face that carry oxygen to his damaged lungs.

He was born at 31 weeks gestation, and his lungs never had a chance to develop like other newborns'.

The couple are foster parents, designated for medically-fragile children. After having three children of their own, Kerensa and Randy made the decision that they could help children by bringing them into their family. Already they have adopted Joey, now a 12-year-old, who has cerebral palsy. Now they have Keegan, and they want to raise awareness and money for the National Lung Association so they can do research and find cures for conditions like Keegan's, and move toward a goal of eradicating conditions like his.

"If Keegan just had the chronic lung prematurity, he might have been off the oxygen by now, but he has other conditions, too," said Kerensa. "Keegan has pulmonary hemorrhage, and idiopathic pulmonary hemosiderosis. The conditions mean that he has a spot on his lungs that bleeds, and they can't stop the bleeding. But if you took the oxygen off of him, he would look and behave just like any other 5-year old. Unfortunately, he can't survive without oxygen 24/7. He also has a gastric tube. He technically can eat, but because of the many surgeries he has had, he doesn't want to eat."

A fundraiser was held Saturday at Morningstar Pottery in Alexandria. 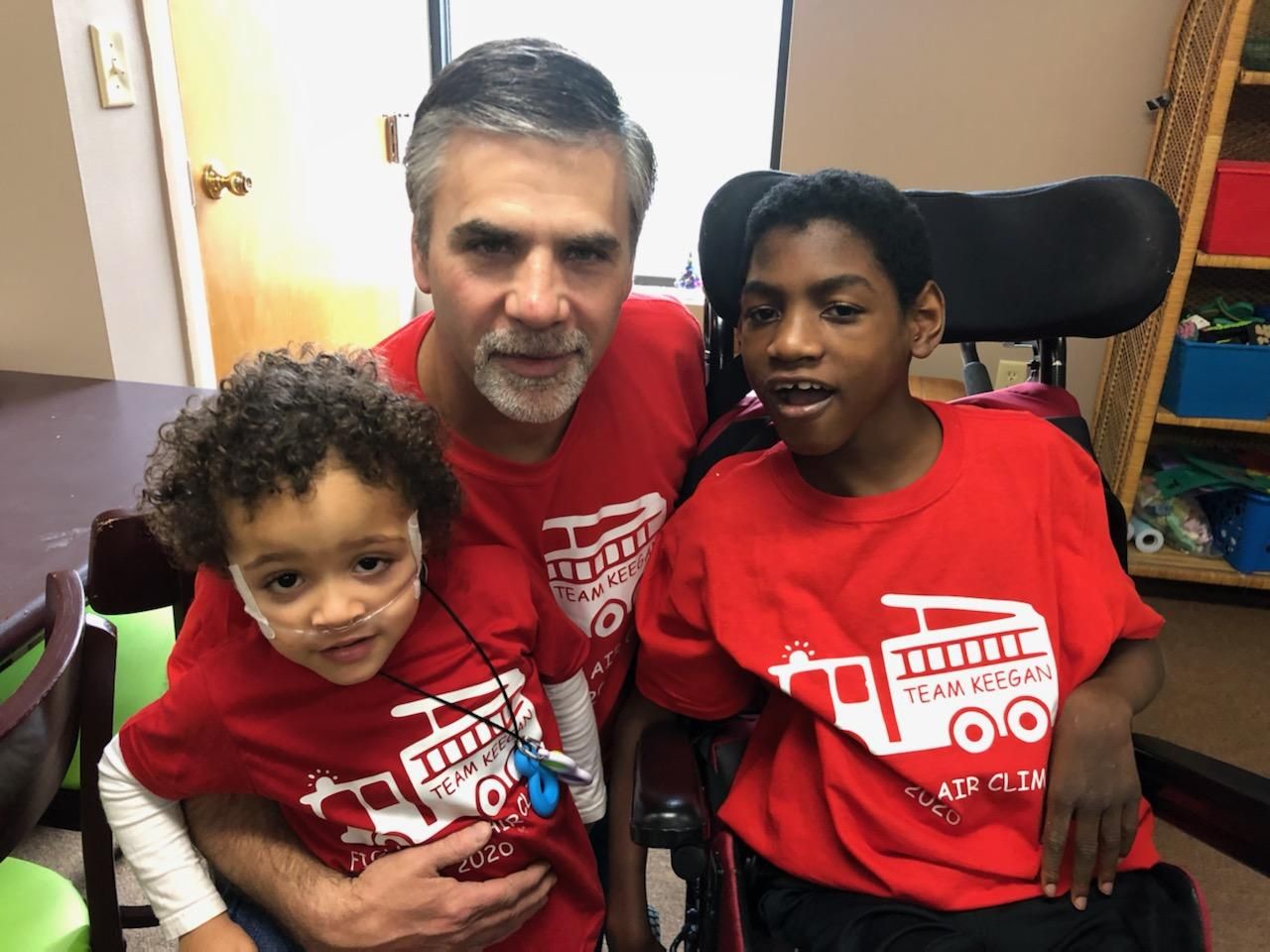 Kerensa said Rhonda Deaton, the owner of the pottery store, offered to hold the fundraiser when she heard that the Smiths were trying to raise money for research. There was also a silent auction and a raffle, with 75 percent of the proceeds going to Team Keegan.

Everyone was wearing red shirts with a fire truck on the front, that proclaimed Team Keegan.

Keegan has loved firetrucks and firefighters since as far back as he can remember. Kerensa related how she took him to the firehouse near their house on September 11, 2016, to take dinner to the firefighters as part of a church group, and they were able to see the trucks and the equipment, and Keegan could climb on them.

"One month later, Keegan went into respiratory distress, and we had to call the life squad," said Kerensa. "It really helped that he knew the firefighters, because he wasn't as scared. And the paramedics knew his color was not right because they had met him before. Since then, the firefighters and their families have become like part of our family."

Also since then, Keegan's special treat is always to go visit the firehouse, or to drive by and see the trucks. Naturally, Keegan's dream is to grow up to be a firefighter/paramedic.

The Team Keegan fundraising page can be found here.

Kerensa doesn't know if Keegan will ever be able to be without oxygen. He goes to preschool, but can't attend when sicknesses are going around, since a cold will put him in the ICU (it happened last year).

Someone has to carry his oxygen tank around because it is as heavy as he is. Kerensa said there is a portable oxygen unit for older people with breathing problems, but they aren't a solution for Keegan because he needs a continuous deep oxygen flow rather than a pulse delivery.

What is an essential business - NKY Chamber Spotlight

Sidewalk Chalk to Spread Positivity in Covington on Sunday

Op-Ed: Emergency Actions in Frankfort Show Government at Its Best