Another round of high school football playoffs is in the books and seven Northern Kentucky teams advanced to the quarterfinals in their respective classes. RCN columnist Dan Weber has a full report from the Ryle-Dixie Heights game; RCN contributor Jason Finnell was at the Dayton-Newport Central Catholic game; and RCN photographer Brian Frey has photos from the Harrison Co.-Scott game. The full scoreboard is below.

Dan Weber writes a sports column for The river City News. You can contact him at dweber3440@aol.com.

Ryle Coach Mike Engler wasn't sure right after Friday's game which of four or five possible matchups his Raiders were looking at next weekend in the Class 6A quarterfinals.

But one thing was for sure after his Raiders' decisive -- and disciplined -- 36-7 district championship in a rematch against visiting Dixie Heights.

"We're definitely going to be at home," Engler screamed to his cheering, celebrating players.

Which could be a very good thing. Whichever one of the teams from Louisville or Lexington that was going to make the trip to Union might be in trouble when they hit the Friday evening rush hour traffic on US 42.

And several hours after the game, the KHSAA set the matchup against Louisville Trinity, Kentucky's all-time leader in state football titles with 27. Now all Ryle has to do is get the 5-7 Shamrocks' buses onto US 42 and they'll be lucky to make it on time.

But if Union has California traffic, it doesn't have California weather with an off-and-on freezing rain that made C.R. Borland Sr. Stadium not all that pleasant a place Friday night.

Certainly not pleasant for the Dixie Heights Colonels (7-5), who had taken a 9-3 Ryle team to the wire in a 13-12 regular season loss that saw the Colonels fail on both two-point extra point attempts when their regular kicker wasn't available.

As it turned out, after a 9-7 first half that saw Ryle leading thanks to a 27-yard Summer Denigan field goal, the Raiders didn't need to worry about whether their soccer star female kicker would have to keep kicking it.

She wouldn't. On this night when the big soccer story in the nation was just 15 miles away right across the river in the Mexico-USA World Cup qualifier, the only soccer that national team member Denigan was thinking about was her signing a scholarship offer Monday from Florida State, the nation's No. 1 college team.

"I'd rather be playing here," said the 5-foot-3-1/2 Denigan whose long blonde braided pony tail extends out of her helmet and well past her jersey No. 12 of her Friday night sports competition. "I thought it'd be fun to do," said the two-time All-American who doesn't play high school soccer but is finishing her first football season.

And it has been fun. She's even made a couple of tackles, although her role on kickoffs is to play the deep safety as she lets her teammates head down after the football. But when a Simon Kenton return man got loose, she had to escort him out of bounds.

Not much of that on this night as the Raiders had all the better of it physically, shutting down everything from kickoffs to short-yardage situations to the passing game.

Just once did senior Dixie quarterback Logan Landers catch the Raiders, right before halftime with a 36-yard strike to Brach Rice to set up Landers' own TD on a two-yard keep. He finished his high school career with 128 yards total offense (10-19 passing for 102 yards, 11 carries for 26 yards).

But that was it. This one belonged to the Raiders after intermission. "Our quarterback run game," Engler said when asked what pleased him most on this night, singling out sophomore Logan Verax and his short-yardage power backup Lucas Colemire

"Logan being a sophomore, he’s just improved leaps and bounds," Engler said. "In my opinion he’ll be one of the best quarterbacks in Northern Kentucky here soon.”

Colemire came on in goal-line situations and pounded it in twice -- from the one and the four -- thanks to his big blocking back Gabe Savage, who also punched one in from the seven. Nathan Yowan added 76 yards on five carries with one -- a 37-yard blast with 4:13 left in the third quarter -- that made it 30-7.

“Colemire’s our guy within the three or four-yard-line,” Engler said. “He’s a scoring machine inside there." Indeed, Colemire has eight TDs on just 44 carries.

The twist of fate sending a late-developing Trinity program, with a state-record 27 football championships, north next week is not what anyone would have guessed. The 'Rocks, beset by covid early and forced to forfeit their game with Cincinnati Moeller, opened with an unheard of six straight losses. But their first win in Game 7 was a 33-32 upset at Cincinnati St. Xavier's defending Ohio champs in what has clearly been the state's toughest schedule.

Trinity played teams from Chicago, St. Louis, Indianapolis and three from the strong Greater Cincinnati League. But now in the playoffs, they've won their two games by a lopsided 116-0 (Marshall County 76-0, Louisville Ballard 40-0) while winning five of their last six.

And while there's no way to quantify such a thing, this Trinity team is without a doubt, the best 5-7 team in Kentucky high school football history.

Junior running back Luke Runyon led Newport Central Catholic with four touchdowns as the Thoroughbreds pounded Dayton, 54-6, Friday night at Newport Stadium in the second round of the 1A playoffs.

Demetrick Welch’s 25-yard TD run got the scoring underway for NewCath and they never looked back.

After forcing a three-and-out from the Greendevils offense on its ensuing possession, Runyon began his scoring outburst. On first-and-10 from the Dayton 27, Runyon took a swing pass from Kolton Smith and bolted to the end zone for an early 14-0 Thoroughbreds lead. 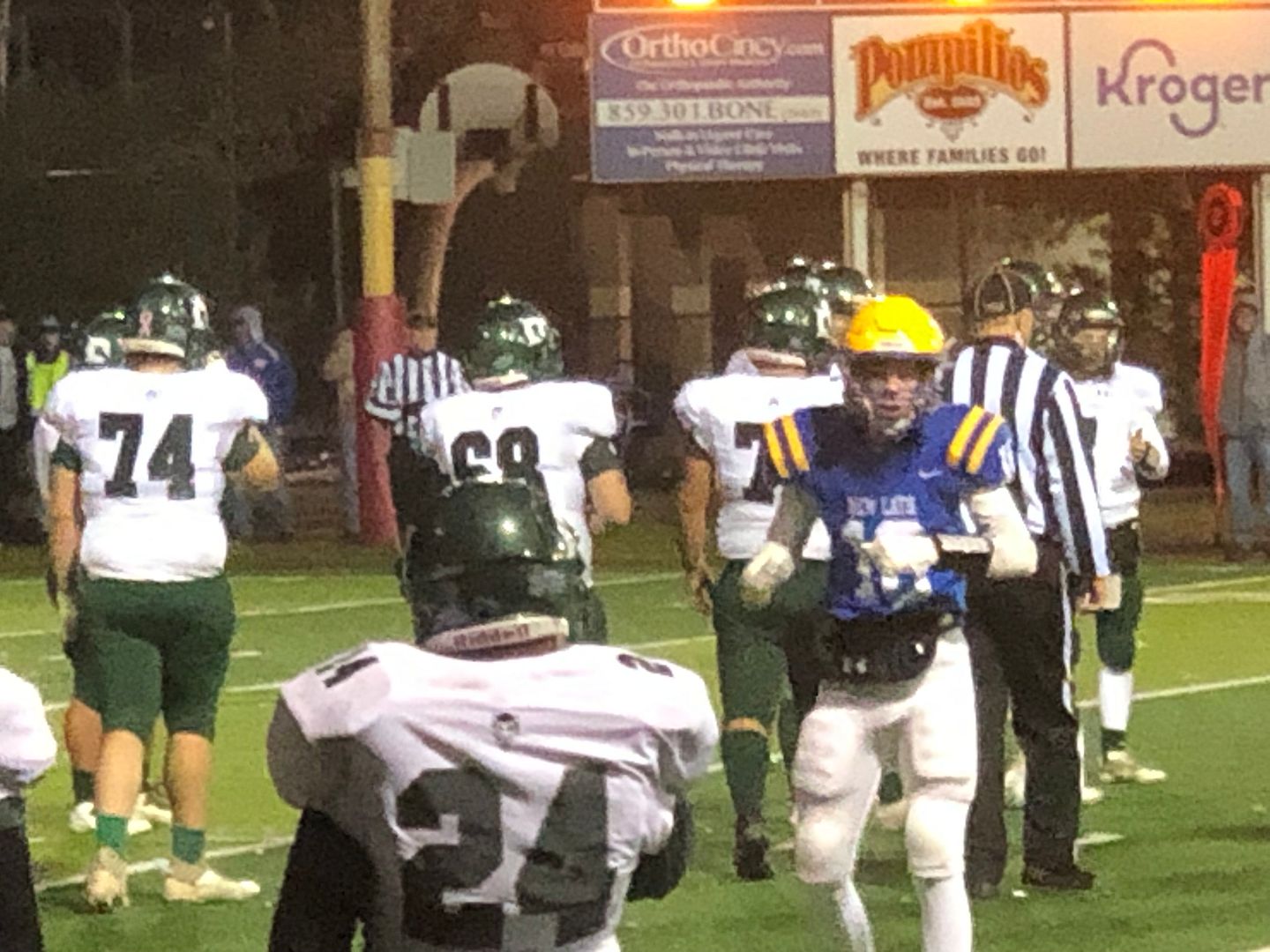 For the Greendevils, the hole they dug themselves was about to get bigger. Quarterback Russell McIntyre’s overthrow landed in the hands of Runyon who returned it forty-five yards the other way for his second touchdown of the night. With five-plus minutes remaining in the opening quarter, the Thoroughbreds held a three-touchdown lead, 21-0.

On its next possession, Dayton’s luck worsened. Following a six-yard loss on a run by Keith Souder on third down, the Greendevils punted away but the ball sailed straight up and upon hitting the turf, bounced favorably back toward the Dayton line of scrimmage for NewCath, giving the Thoroughbreds good field position inside the Greendevils 35.

Dom Morgan’s 14-yard carry began the drive and NewCath found themselves at the 20-yard line after one play. Smith’s second down pass fell incomplete in the end zone but Morgan’s 20-yard run on the ensuing play put the Thoroughbreds ahead 27-0 after a blocked extra point. But it would be the Runyon show once again shortly. After failing to gain a first down, Dayton punted to Runyon, and he zigged and zagged sixty-five yards as time wound down in the first quarter for another NewCath score and a 33-0 lead.

However, the Greendevils caught the Thoroughbreds defense off-guard when it lined up in punt formation on its next drive. Not only did Dayton run a successful fake punt to perfection, but it did so on its own four-yard line, as Preston Baggett took the snap ninety-six yards for a touchdown to get on the scoreboard, 33-6.

One of NewCath’s longer drives of the game on its ensuing possession chewed up eight minutes of the clock but they would be kept out of the end zone.

The Greendevils elected to go for an onside kick to begin the third quarter, but NewCath recovered and picked up where it left off near the end of the opening quarter. Deep inside Dayton territory once again, Smith found Runyon for a 24-yard TD and the Thoroughbreds increased their lead, 40-6.

With rain coming down steadily on its next possession, McIntyre’s second down pass downfield sailed over the head of his intended receiver and into the hands of Thoroughbreds cornerback Matt Landrum. Several plays later, Morgan’s nine-yard TD reception made it 47-6, NewCath. Landrum notched his second interception of the game on Dayton’s next drive, a 65-yard return that put the Thoroughbreds up, 54-6.

NewCath (9-3) hits the road for the first time in the playoffs next Friday, facing Russellville. Dayton concludes its season at 5-7.

The Mustangs are still perfect at 12-0 and march on to the next round of the playoffs, this time hitting the road to play at Raceland (11-1).

The Bearcats have now won seven consecutive games and improve to 9-3 on the year. Walton visits Ft. Mitchell to take on undefeated Beechwood in the quarterfinals next week.

The Eagles are flying high with two consecutive blowout wins to open the playoffs. Scott (8-4) advances to the quarterfinals, on the road next week at Boyle Co. (11-1). RCN photographer Brian Frey has photos from this game in the slideshow below.

The Colonels have now won seven straight games to improve to 9-3 and advance to the quarterfinals in Class 4A. Cov Cath hits the road to take on Woodford Co. (12-0) next week. Conner's season ends at 7-5.

"Lost in Yonkers" Returns to Ludlow Where it Was Filmed

Roberts Appointed to Executive Board of Women's Legislative Network

Former Dayton City Hall to Be Considered for National Registry

Historic Campbell Co. Bridge to Be Rehabilitated in $2.1 Million Project

Op-Ed: Kentuckians Thankful for Food Relief but Hunger is Not Off the Table